Meeting the locals in Tra On

Time for Tân to have a day off today as I went on the 'Mystic'sampan today! 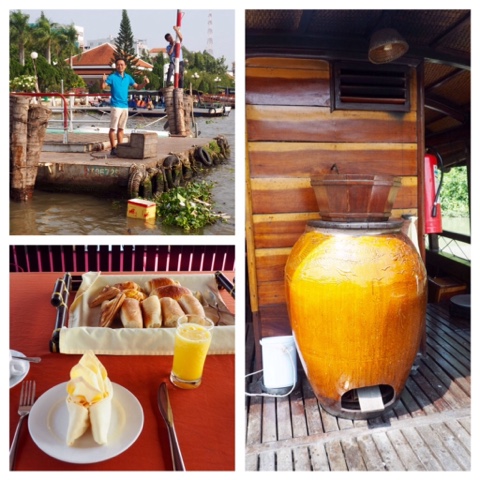 The trip started with breakfast onboard...there's only me, so it felt rather strange.  It wasn't meant to be a private tour, but I was the only one who had booked, so today was my day! 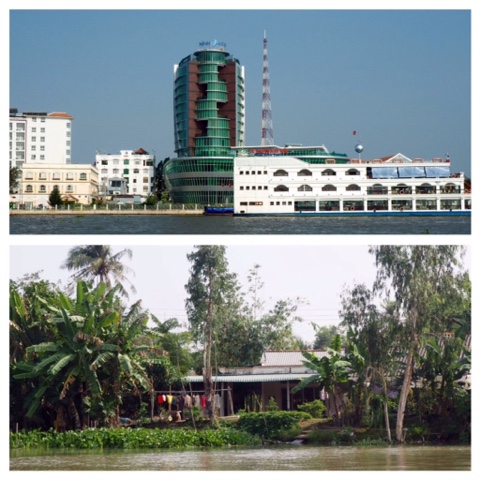 Cruising down the Mekong once more I was struck by the contrasts that are Vietnam. Modern high rise on one side and local life on the other. In just two years I can see the changes happening, the young don't want to follow the old ways, they want what the west have... 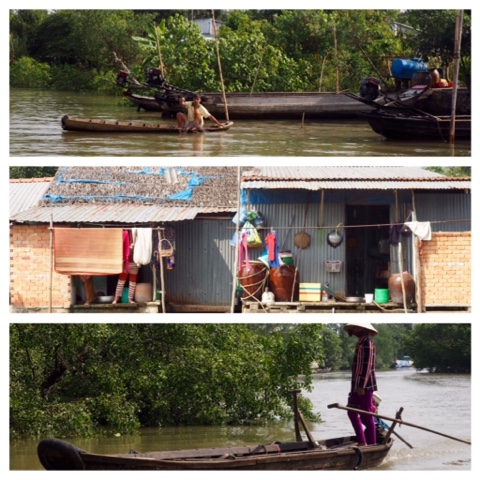 Even so daily life goes to the same rhythms for the moment, and in the Mekong Delta everything revolves around the river. 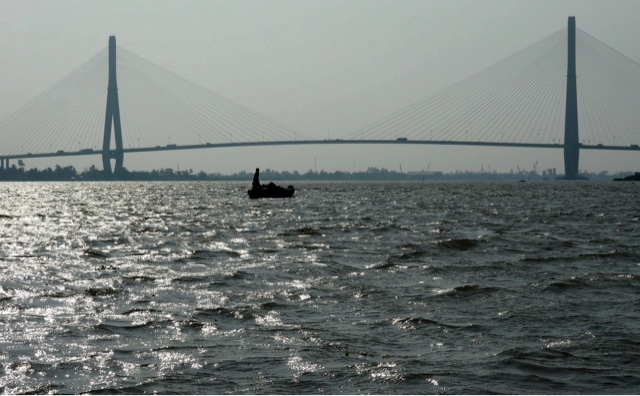 It truelly is the life blood of this region. 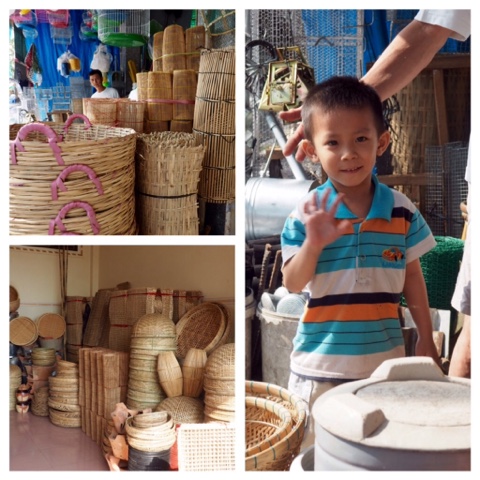 We stopped so we could explore the local market, but before we reached it I spied ....baskets.  I'm a girl who loves a basket!  Besides, with a salesman as cute as this, it would have been rude not to buy! 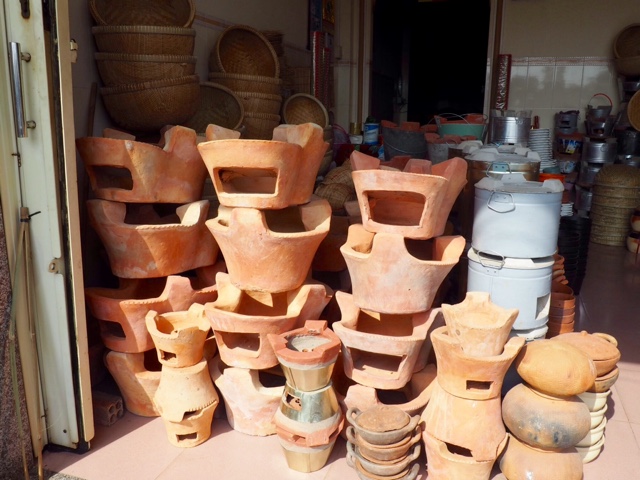 Also piled high were the cooking stoves, very simple and very cheap to run.  Remember the piles of sticks and coconut shell by the roadside?: now you know why! 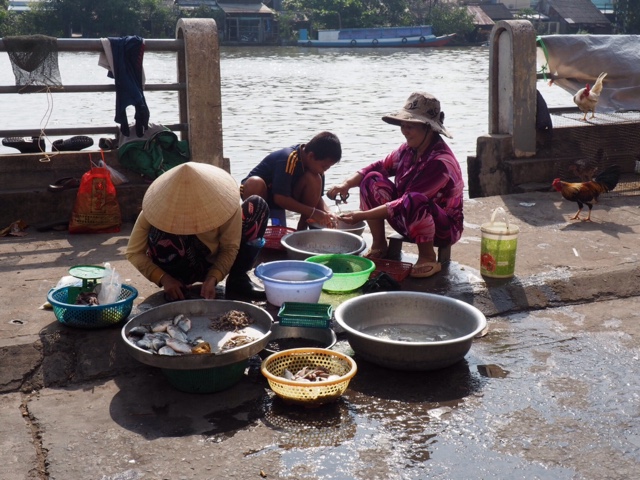 Much of daily life is conducted by the roadside, see the chicken trying to sneak up and grab some titbits? 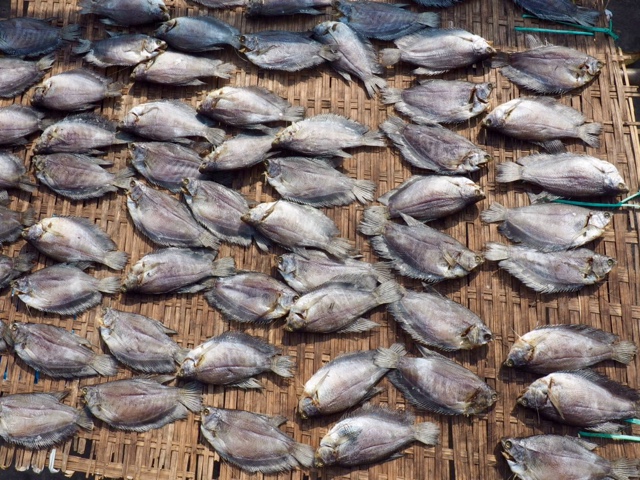 Spread out on bambo mats this fish will dry out quickly, 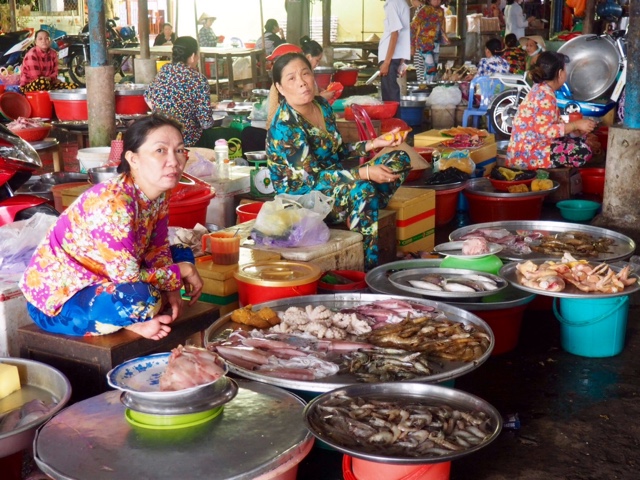 Or you can buy fresh if you'd prefer.  We walked through the meat market.  Bet you're glad I didn't photograph in there.  No part is considered inedible... 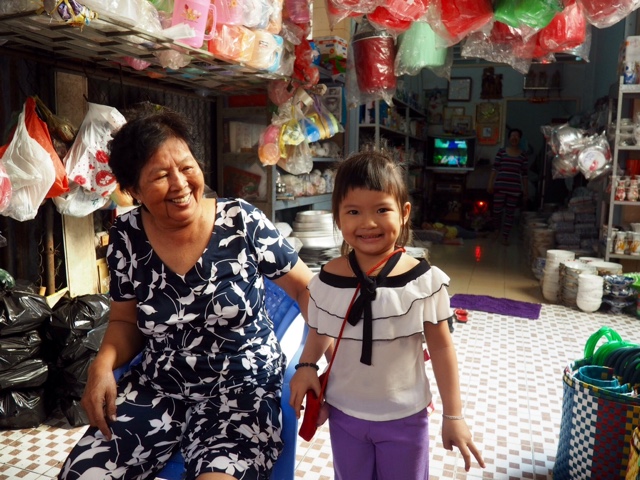 The Vietnamese are a smiley chatty people, they start it young! 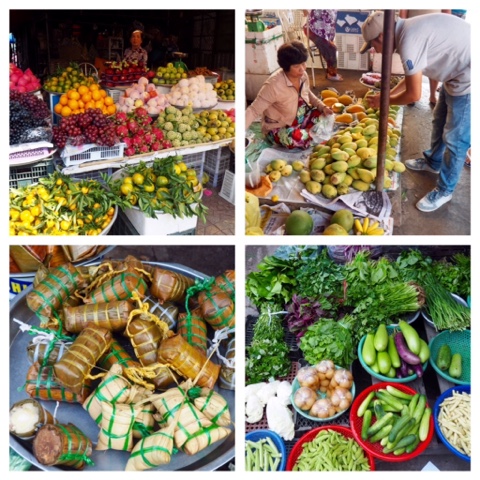 The fruit and veg are much more pleasing to photograph.  The little banana leaf wrapped packages are food-to-go! 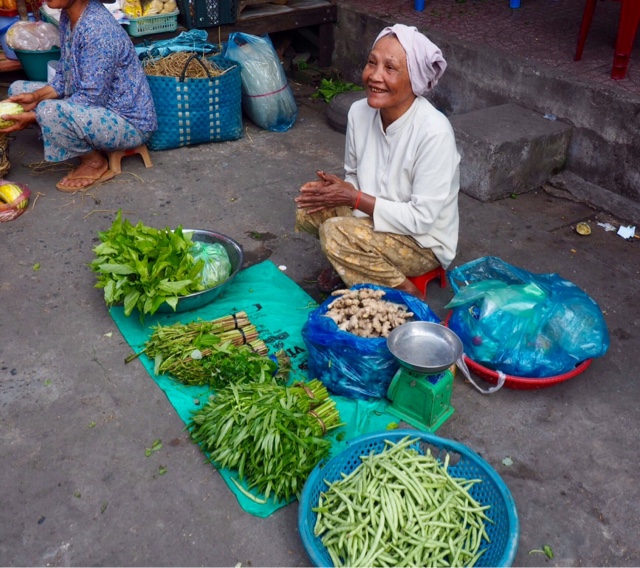 This part of Vietnam used to belong to Cambodia once upon a time, so there is still a large community of Khmer people living here.  This lady wears the traditional Khmer headscarf. 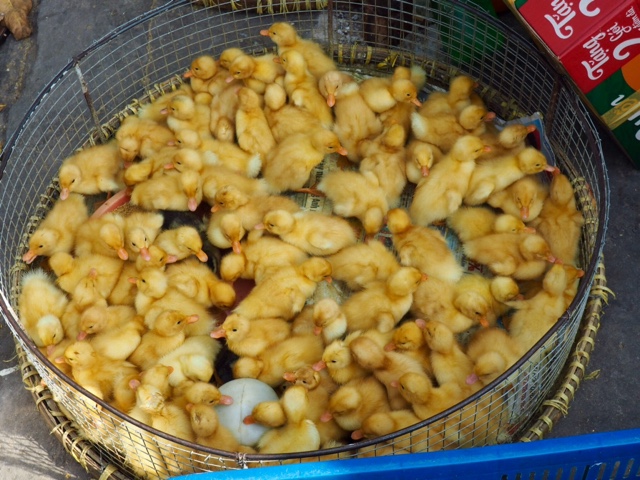 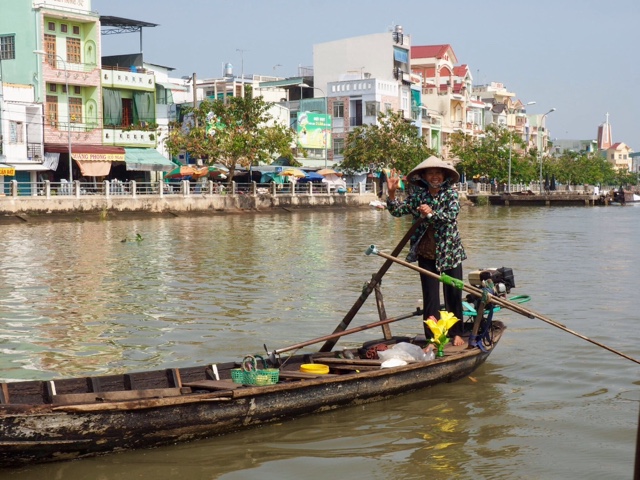 Taxi? If you need to get your purchases home, this lady will row you there. 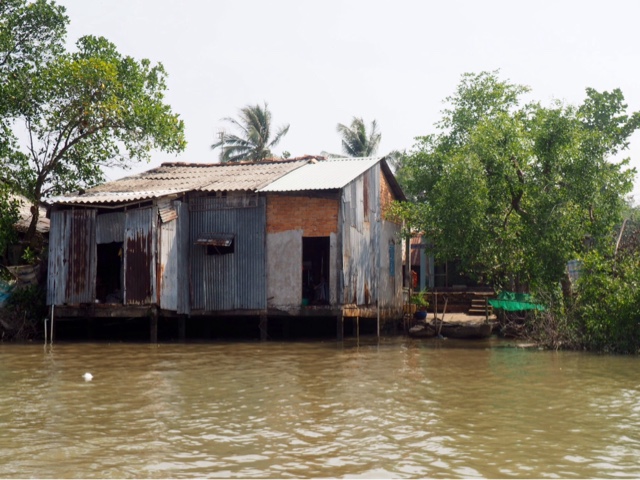 Many houses line the banks. 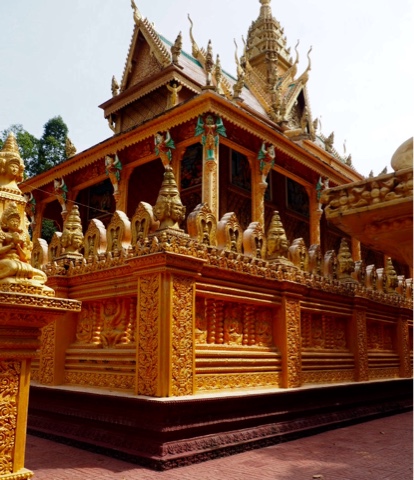 Further down river we visit a Khmer sanctuary with its golden pogaoda, 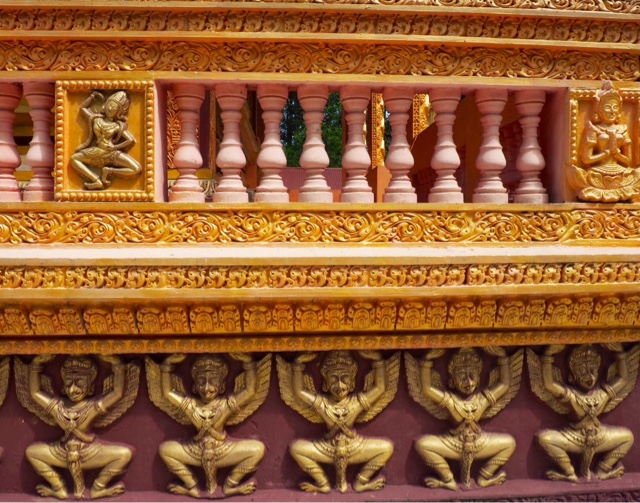 In the bright sunshine it shone brilliantly bright 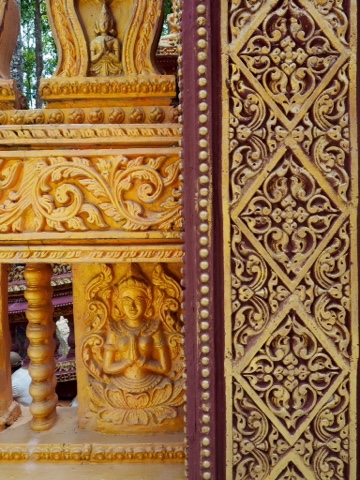 All a bit too bling for me. 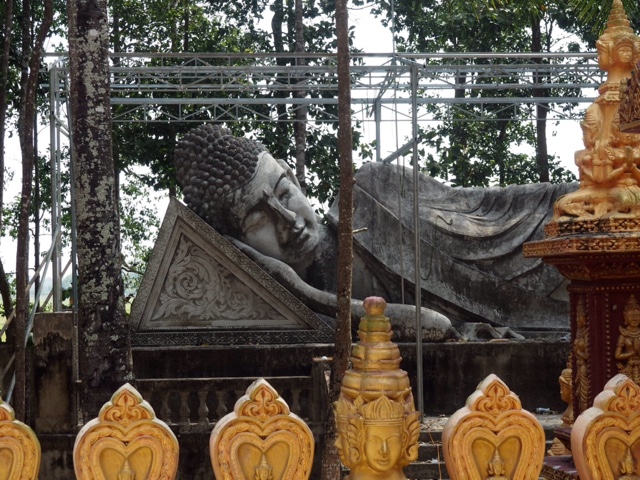 By stark contrast is the grey sleeping Bhuddha. 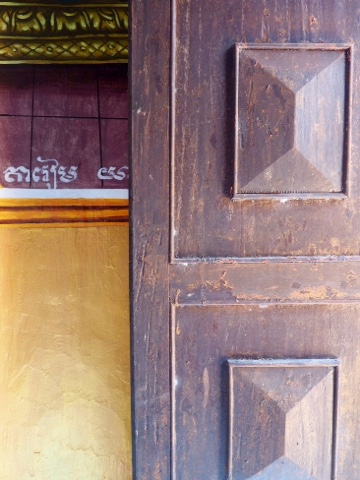 The contrast of rich decoration and decay 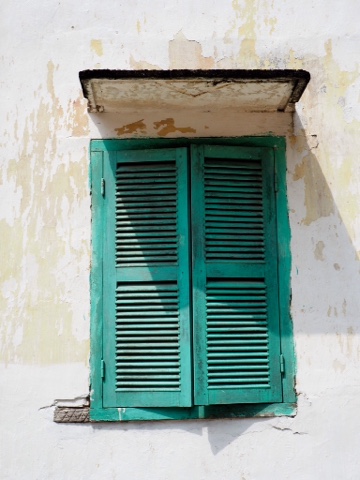 is what interests me most. 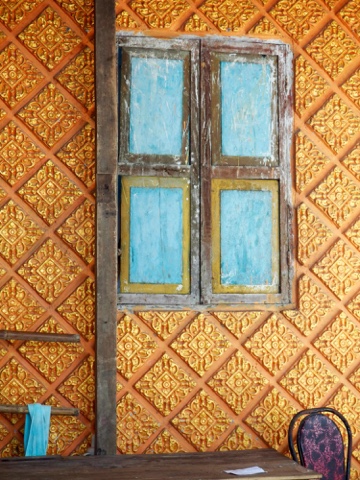 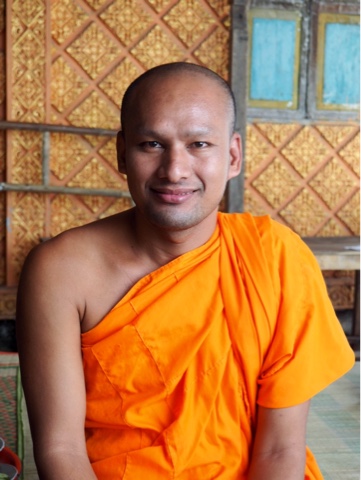 But the monks don't seem to mind.  Today this monk was on kitchen duty. 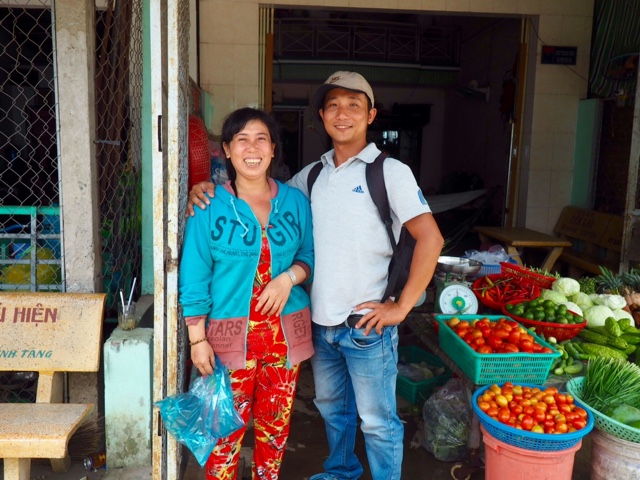 Back in the sampan we head down river before taking the bikes on land to cycle through the pomelo groves.  The smell was intoxicating, the sun on the citrus skins scents the air. Here is my guide for the day, Lông with his auntie.  We were cyclin past, but stopped to say hello! 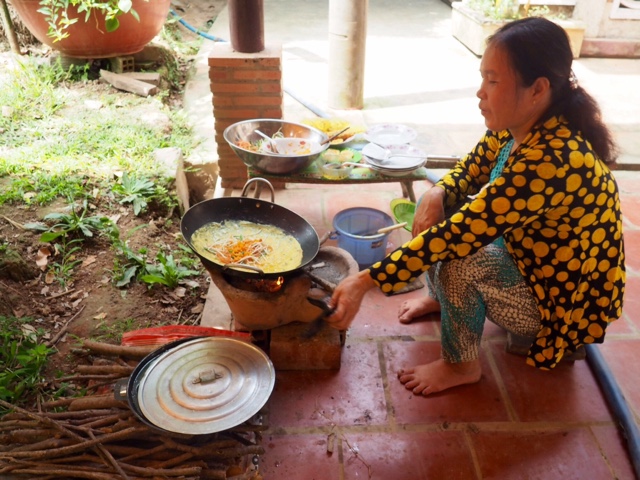 By lunchtime we arrived at a local farm and helped to make lunch.  Well I watched as the Vietnamese pancakes were made, and then had a go myself.  Typically the first one was rubbish; but then isn't it always? Made from ef, coconut milk and spring onions it is cooked in a wok with papaya, bean sprouts and coriander grated beets and shrimp.  We had lunch with the grandfather, a VC fighter in the war.  It was interesting talking with him and amusing to hear his views on Trump.  Yes, even the Vietnamese don't have a good word to say about him either. Loved Obama though. 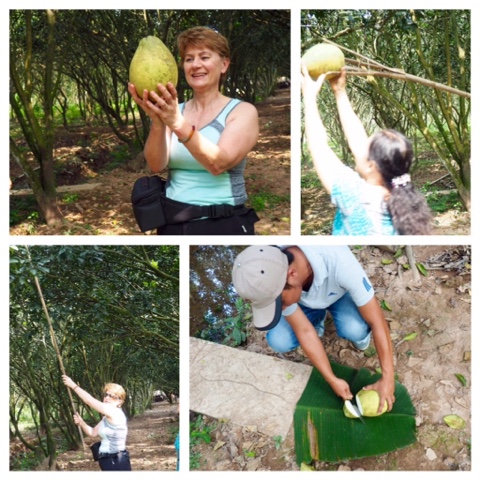 After lunch we went to have a look at the farm, which produced pomelo.  They are so heavy, it took all my effort not to drop the one I was picking.  Tastes good though. 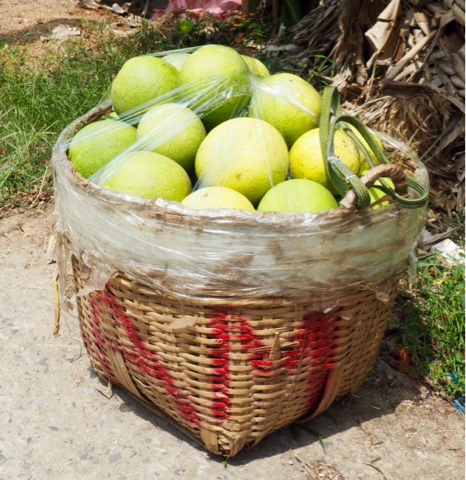 There was a special pond for growing the water hyacinth, the flowers are quite a delicacy. 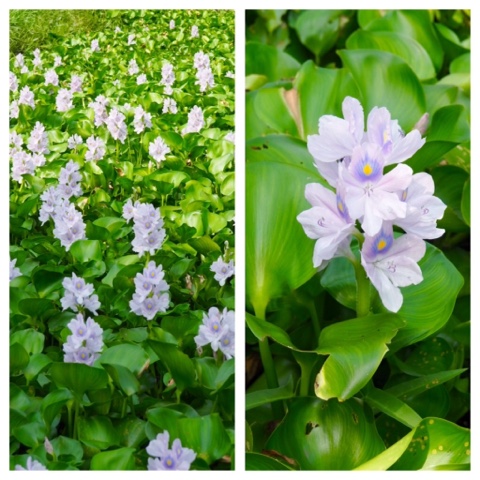 Such a pretty colour. 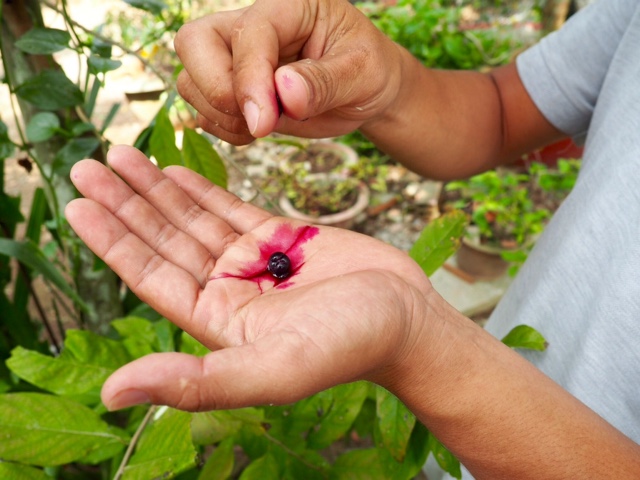 And this berry they used for ink, typical boy, he ended up with it all over his hands!
Posted by Unknown at March 04, 2017 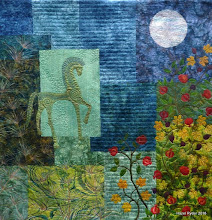